Some History about Postural (& Bodymind) Integration®

Some History about "Postural Integration®"

compiled by the ICPIT Secretariat and Council Members.

„Bodymind Integration” (since 2007 also known as „PsychoCorporal Integration”) originated with Dr. Jack Painter’s work on clients beginning in the late 1960’s. Dr. Painter (1933-2010) was a Ph.D. graduate of Emory University (Atlanta, Ga.) in Philosophy, Literature and Psychology and served as a professor at the University of Miami for 9 years. Influenced by Reichian Therapy (Wilhelm Reich), Rolfing (Ida Rolf) and Gestalt (Fritz Perls) traditions he found in his own search for personal clarity and in work with his clients, that a body-anchored approach was needed to bring these traditions together in his own approach. He received Gestalt training from Marty Fromm (Miami, Florida, an early pioneer in Gestalt work with Dr. Fritz Perls), as well as workshops directly with Perls. He received a complete program of individual sessions from Dr. Ida Rolf and Dr. Bill Williams (the founder of Soma). But through constant experimentation found his own ways of touching the body. In combining touch with a Reichian approach, he studied and collaborated with Dr. Raffaele Estrada Villa, Director of the Instituto Wilhelm Reich in Mexico City. As well as sessions and sharing and colleague work with Dr. Peter Levine, author of Waking the Tiger and a well-known Reichian therapist, founder of Somatic Experiencing®.

Central to Postural Integration®/Bodymind Integration, since its inception, is the view that

From 1973 to the present, Dr. Painter has trained an extensive network of teachers (trainers) and practitioners in Postural Integration (from 1990 onwards also in Energetic Integration® and Pelvic-Heart Integration®), not only in most of the EU countries (Belgium, Holland, France, Germany, Italy, Austria, England) but also in Switzerland, U.S., Canada, Mexico, Nicaragua, New Zealand and Australia.

Two books by Dr. Painter outline many of the methods and concepts: Deep Bodywork and Personal Development and A Technical Manual of Deep Bodywork. (translated in several languages. A yet unpublished updated version of these books exists and is used by students.). Also Dr. Painter has contributed numerous articles in “Bodymind World News and Research Report.” Many books and articles by students of Dr. Painter have appeared during the last 30 years. 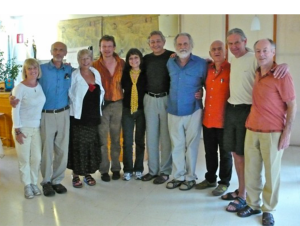 The application of the "therapeutic touch" of Postural Integration® and the "deep myofascial bodywork techniques" used in an integrated way are recognised in the IFCC approach as possible tools for psychotherapy. This was unthought of 40 years ago.

Other ICPIT Trainings, building also on the later developments of Jack Painter's work are not able to work within the field of psychotherapy. In some countries, like Italy, because of reasons of legislation, Postural Integration® can not be taught by our Trainers (Psychologists-Psychotherapists) as a psychotherapy to non-psychologists (who have exclusive rights to the profession of psychotherapist)....

Bodymind Integration is PsychoCorporal Integration, which also gave an impetus to the "field of Body Psychotherapy" to work in a more integrative way.

How did this happen?

First Dr. Painter trained and worked closely with Dr. Alex MacMillan in Boston, who eventually established the Association of Body Oriented Psychotherapy which has helped bring bodywork more into the mainstream of psychotherapy in the USA.

In collaboration with Drs. Willem Poppeliers, a Developmental Psychologist, Bio-Energetic Analyst and Postural Integration® Practitioner, Dr. Painter, also gave a strong impulse to help "ground” the therapist and "stay clear" in his/her sexuality while working with hands-on body-oriented therapy. Together they lead the very first "Sexual Grounding®” programme, now an independent form of psychosexual body-oriented psychotherapy, followed by the training of teachers and supervisors in its professional ASGTT management program of somatic and erotic/sexual transference and counter-transference in Body Psychotherapy.

Through participation in the International Association of Psychocorporal Therapy, which has given conferences in Mexico, Montreal, Boston and Ischia (It), representatives of ICPIT-Bodymind Integration have demonstrated to colleagues in research papers, workshops and roundtable discussions that Postural Integration®  and Energetic Integration® offer powerful psychotherapeutic interventions (not claiming to be a psychotherapy) through an active form of body reading (to help the client discover the conflicts of energy and awareness at work in Bodymind), specific breath techniques and tissue manipulations. Dr. Painter has been a member of the Scientific Committee of this Association until his death and he and other ICPIT-members have continually called attention to and invited review of the assessment and intervention powers of PsychoCorporal Integration.

Since Bodymind Integration brings together Gestalt, Reichian, Deep Tissue Work, Therapeutic Touch, acupressure and movement awareness disciplines into a single unified framework it is only natural that many of our practitioners and trainers are qualified in these areas. Bodymind Integration has grown through contact with these areas, but as well has been giving an impetus for these areas, including Psychotherapy to open to a more integrative stance. Body and mind are touched upon and helped simultaneously.

The Three methods of PsychoCorporal (Bodymind) Integration use the same central methods and concepts, with different foci.

As „PsychoCorporal Integration”, these three methods work with a dynamic style of "body reading", in which the client dialogues and claims parts of their armored experience. Also the use of certain types of breathing techniques, together with deep exploration of the body tissue and simultaneous verbal expression of feelings is based on a principle of non-causal simultaneity not pursued in other psychotherapies. All these aspects are facets of a central view of the individual as an energetic élan exhibiting physical, emotional and cognitive dimensions which are all part of an energetic wave. Blockages are seen also as running through all these dimensions. For example, held-up (upward) energy is part of physical inflation, pride and controlled thinking and our work with this blockage is to help in a surrender of the breath, feelings and tissues. Coming from this view, specifically formulated psychotherapeutic goals can easily be drawn by the therapist (if he/she is a psychotherapist) in agreement with the client.